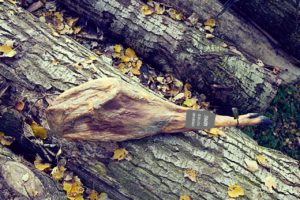 What does "Pata negra" “mean”?

Pata Negra is a term which is often used to refer to high-quality products come from the Iberian pig. literally it refers to the skin color of most of these pigs and their hooves; Black.

The reality is that within the Iberian breed different types with different skin colors; Red as the Torbiscal, the Retinto. Brown with dots; the Manchado the Jabugo or blond like the Rubio Gaditano.

The widespread use of the term “mean” is due to the fact that it is the most common and used varieties of the Iberian pig are; Lampiña and Entrepelada.

Iberian breed pigs are generally black. The reference to ' black ' shall not apply, however, only for the skin color but also the color of the hooves. Not all Iberian pigs have black hooves.

There are also black Iberian pigs that have nothing to do with race and that is why it is so important to look good on the label to know exactly what kind of ham you really have to do!

We can therefore conclude that the expression “mean” by some swine traders often is used to the value of their merchandise (the pigs) increase. In this way, a higher price for the pork generated by the use of the term "Pata Negra".

And that is precisely the reason why refuse to hamexperts the term “mean” to use to describe the quality of a ham.

The lack of a full and detailed labelling, in this context, of course, creates consumer confusion. To certify the quality of Iberian ham is important to note that there are other factors determine the quality, such as the (extra) feed the pigs and the living conditions of the animals.

On the label of a "Cebo de Campo" need to read that these pigs have lived in freedom and not fed with pig feed and grain. And "Bellota" on the other hand, comes from pigs that have lived in freedom of the Spanish Dehesa, they have many miles metsers and have fed with grass, herbs and acorns of the holm oak, ingredients that provide the characteristic taste of a Bellota.

Another quality characteristic is also the characteristics of the pig hoof; to the hoof is good to see if the animal has lived inside or outside, has had movement etc. It is the movement that the beasts have had does something with the taste of the ham.

So remember well; Search the hametiketten for the words: “Jamón de Bellota 100% Ibérico” Instead of “Pata Negra ".

This is the only ham that 100% According to the law meets the highest quality, This does not mean that the other hams are bad but it is important to be able to distinguish and understand how the prices of the different hams be determined, be so honest!